If you’ve skimmed the freezer section lately, you’ve probably noticed that dairy-free “ice creams” are trending. Whether you’re vegan, lactose-intolerant or dairy-averse for other reasons, you have more choices than ever: Halo Top’s dairy-free options arrived in Canada last month, for example, while brands like Ben & Jerry’s have rejigged some of their most popular flavours to create zero-dairy versions. There’s a growing variety of substitute ingredients, too, including coconut milk, cashew or almond milk, and tigernut milk.

According to Canadian regulations, “ice cream” is a term reserved for products containing dairy, with specific percentages of milk fat. So these are officially labelled “frozen dessert,” but that’s just a technicality. We all know these dairy-free tubs are trying to pass for the real deal. The question is, how convincing are they?

To find the best dairy-free ice creams, we set up a blind taste-test at one of our friendly neighbourhood gyms, One Academy. We brought in tubs of eight different options, from brands big and small—with the labeling all covered up to preserve the mystery—and asked a bunch of sweaty athletes for their totally honest reviews. Here’s the scoop. 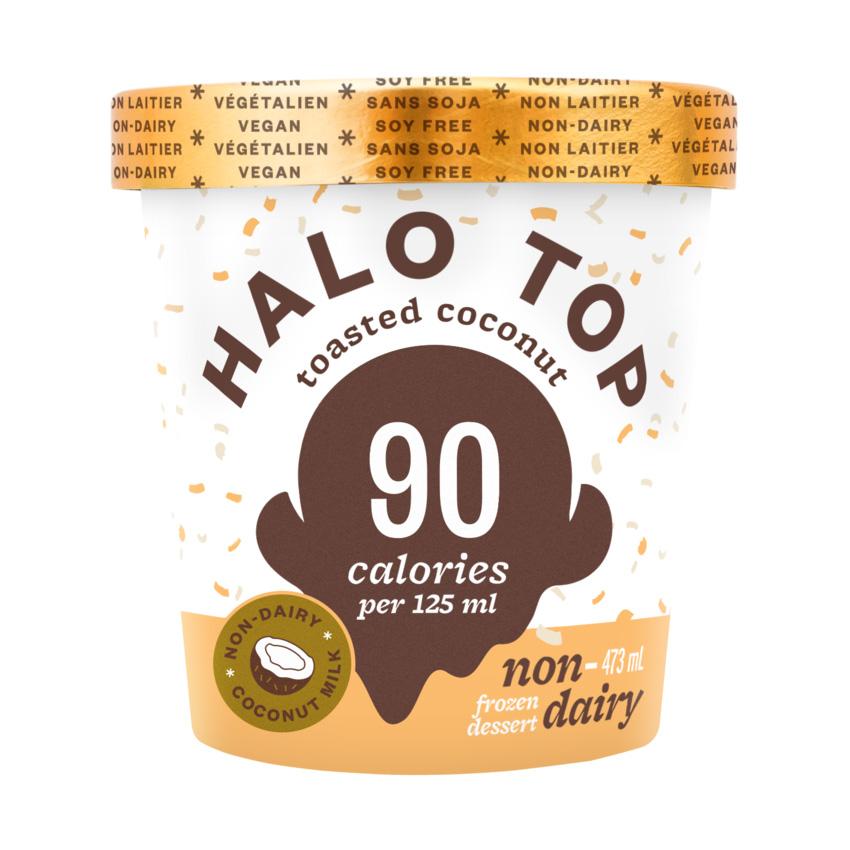 The company: Los Angeles–based Halo Top is best known for its “guilt-free” ice creams—280-360 calories per pint, depending on the flavour. Supermodel Karlie Kloss claims to “smash a whole pint” when she’s on a bender.

The blind taste-test: Our reviewers only had positive things to say about Halo Top Toasted Coconut Non-Dairy. If anyone noticed the sweeteners, they didn’t comment. 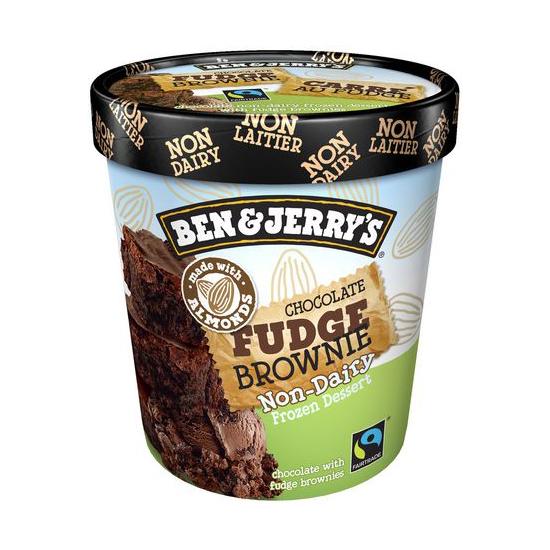 The company: Ben & Jerry’s launched its first “everything but the cow” pints back in 2016. The line has since expanded to six flavours, including dairy-free versions of fan favourites, like Chocolate Fudge Brownie.

The blind taste-test: This one was polarizing among our reviewers. Some ranked it as their favourite; others would rather not eat it again. 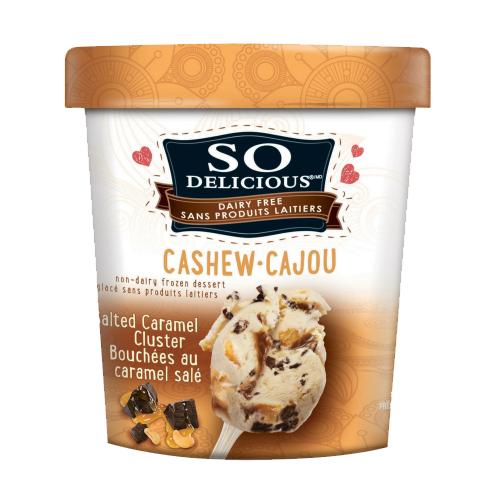 The calorie count: 180 calories per half cup.

The company: While many other brands we taste-tested sell both dairy and non-dairy products, So Delicious is all about dairy-free. It makes almost-ice-creams with not only cashew milk, but also coconut milk, almond milk and soy milk.

The blind taste-test: Even though So Delicious has been doing dairy-free for over 30 years, our reviewers were indifferent to this Salted Caramel Cluster Cashew: only two people in the group were inspired to jot down any comments. 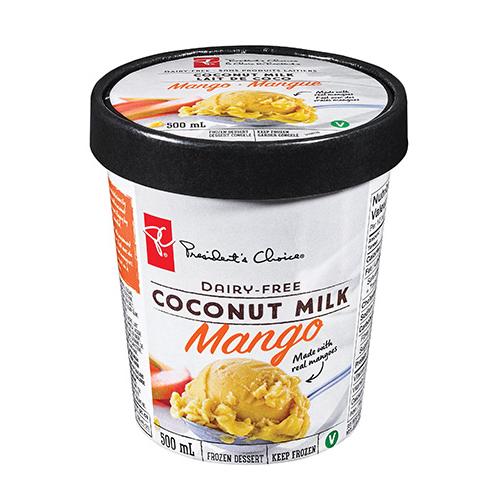 The company: When Canada’s largest food retailer starts making its own dairy-free desserts, you know there’s demand. This product from President’s Choice, Loblaw’s in-house label, is also a bargain: we spotted it for $4 at the local No Frills.

The blind taste-test: President’s Choice Dairy-Free Coconut Milk Mango was a crowd pleaser, earning thumbs-up across the board, with reviewers coming back for more after their initial scoops. 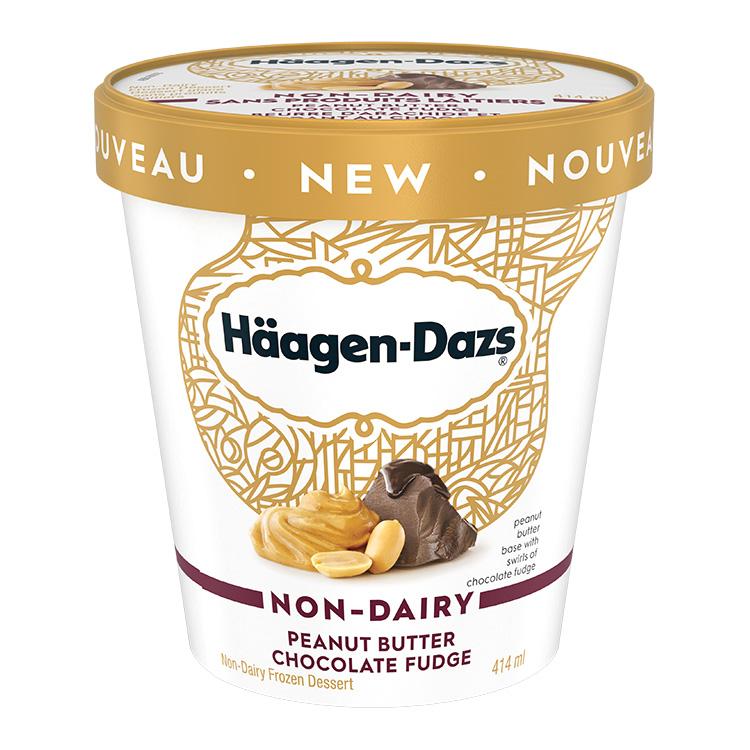 The dairy substitute: Instead of a milk-like ingredient, it uses a peanut butter base (!).

The blind taste-test: Häagen-Dazs Non-Dairy Peanut Butter Chocolate Fudge got raves. Given that the dairy replacement/base ingredient is straight-up peanut butter, it’s pretty decadent. If you prefer desserts that taste like sugar bombs, you’ll probably like this. 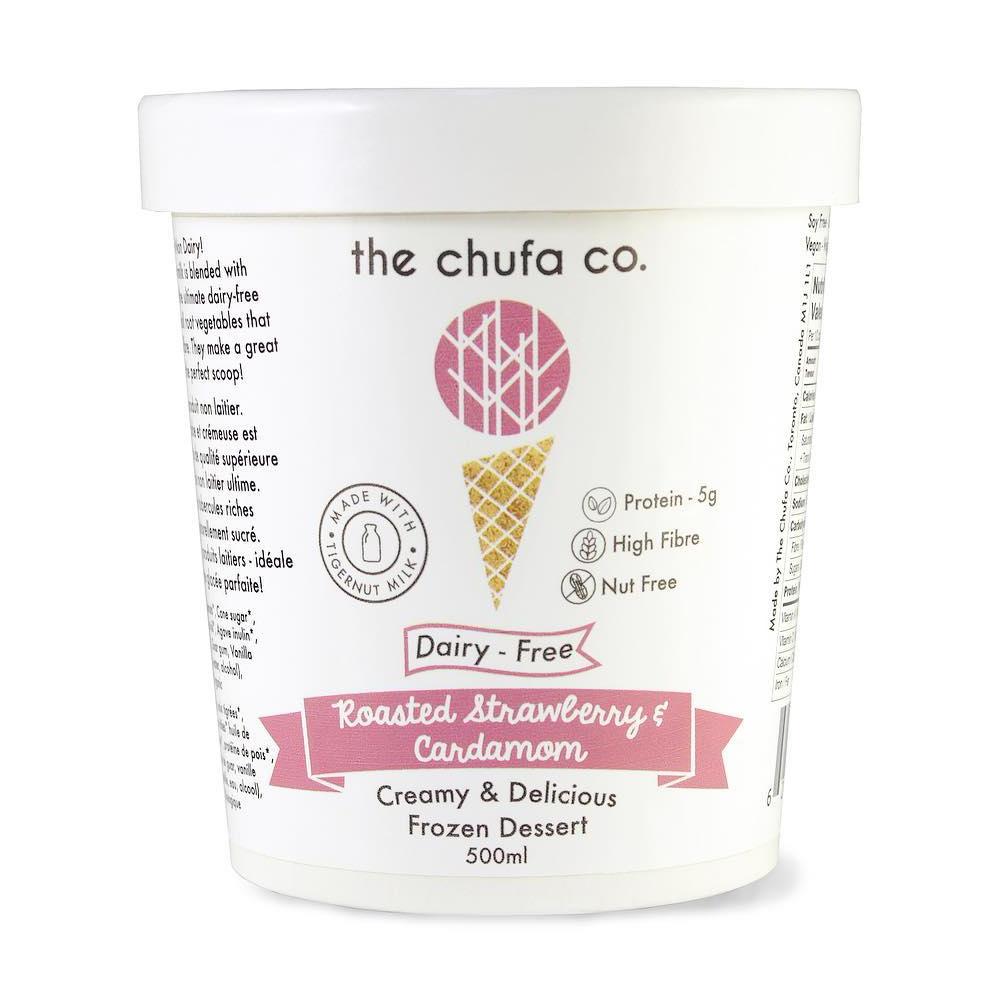 The dairy substitute: Tigernut milk. Not a type of nut at all, but rather a small root vegetable, tigernuts are naturally sweet and fibre-rich. They’re the key ingredient in horchata de chufa, Spain’s popular plant-milk drink.

The company: A Toronto-based startup, The Chufa Co. describes itself as Canada’s only supplier of organic tigernut ice cream and milk.

The blind taste-test: Several reviewers seemed perplexed by the flavour of The Chufa Co. Dairy-Free Roasted Strawberry & Cardamom, asking what it was since they couldn’t figure it out. One entire pint was left untouched by night’s end. 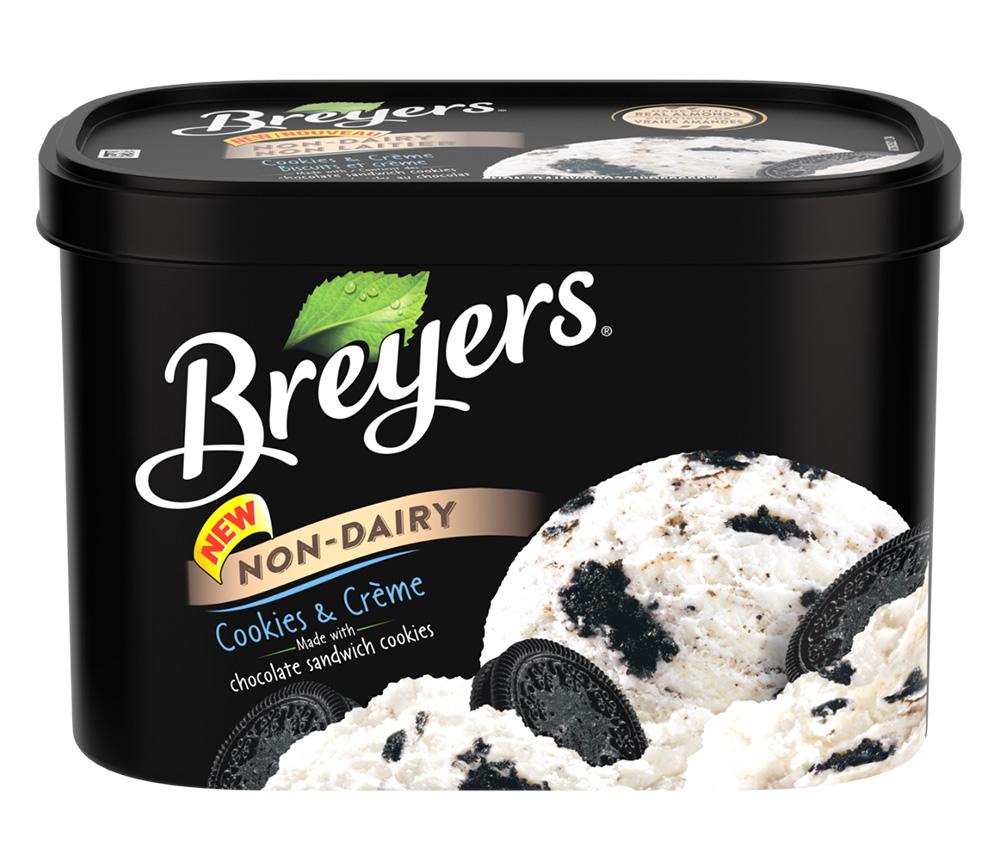 The company: With a history dating back to 1866, Breyers has old-school appeal for ice cream traditionalists. But even it’s joined the non-dairy trend, quietly releasing two flavours.

The blind taste-test: Instead of almond milk, ground almonds are the key ingredient in Breyers Non-Dairy Cookies & Crème—and it worked, at least according to reviewers who appreciated the texture. 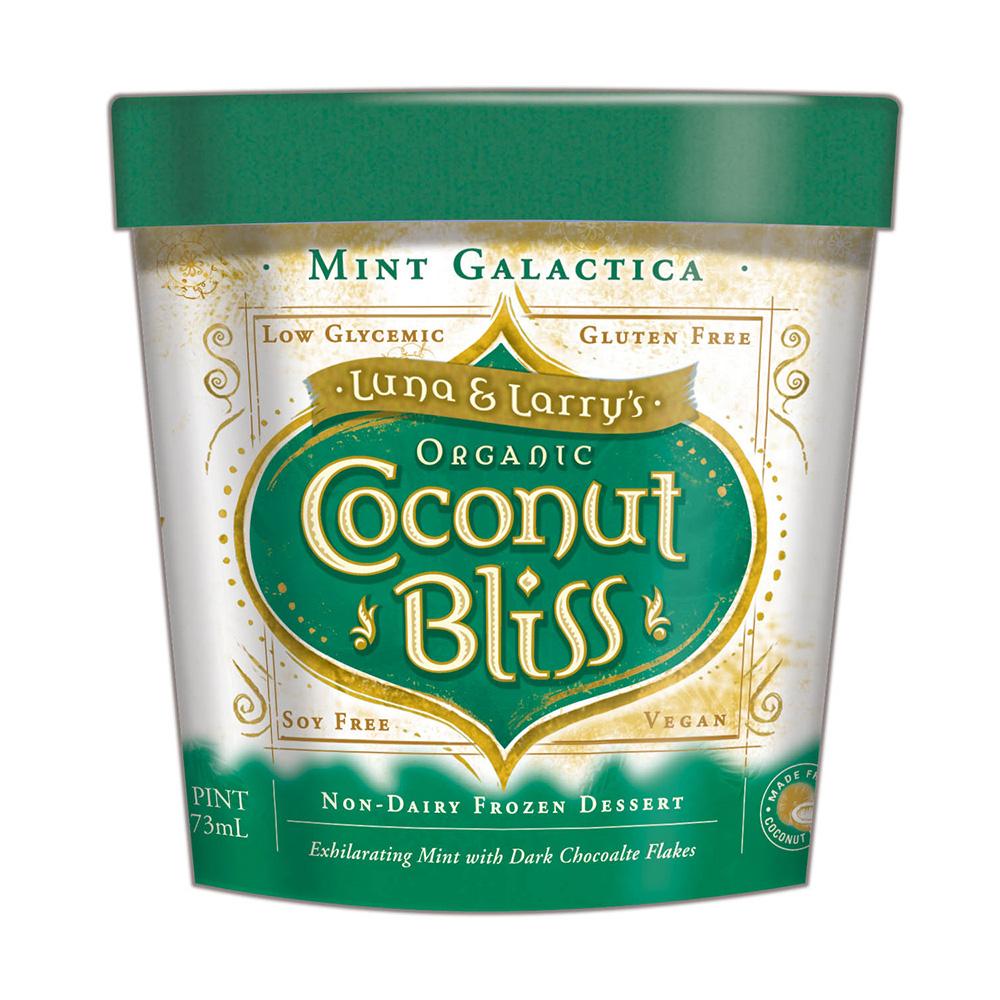 The company: Since the start, Luna & Larry’s has been all about dairy-free ice cream—the co-founders began hand-cranking their own when they couldn’t find any they loved. The brand was named Favorite Ice Cream in the 2015 Veggie Awards by vegan magazine VegNews.

The Hyped-up Beyond Burger Has Landed in Canada, But Is It Any Good?

Inside One Academy, the Toronto Gym Started by an Elite Obstacle Racer

Why Plant-Based Meat Tastes So Good

A Love Letter To My Booty Band – It’s True Love, Not A Booty Call

Where The Heck Did Activated Charcoal Come From? And Does It Really Clean Teeth?

Best Mascaras: Our Ride Or Die Picks for 2021 (and Forever!)

THAT WAS GREAT. LET’S DO IT AGAIN SOMETIME.

Drop us your email, and we’ll keep in touch. Unsubscribe anytime.

It was fate that brought you here, now make the choice to keep in touch.